Home News If anyone is going to work in a government office, read this,...

CM Rupani: Amid worrying situation of Koro transition in Gujarat, Chief Minister Vijay Rupani convened a special meeting at Gandhinagar today. In which government offices in the state have been decided to be closed on Saturdays and Sundays.

Government offices will be closed on Saturdays and Sundays, Offices will be closed Saturday-Sunday until May 15. Ordered to keep 50 percent staff on other days. The meeting, chaired by the Chief Minister, will have a holiday in the state government offices from Saturday to Sunday, May 15. The state government has taken this decision for the purpose of controlling the transmission of the corona.

Order of operation with 50% staff till 15th May. 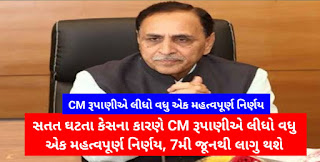 MLAs will be able to provide assistance from their own grants

With a noble intention of strengthening the state government’s fight against the Novel Corona virus, the legislators have decided to provide up to Rs 25 lakh for the installation of state-of-the-art medical equipment for civil hospitals, government hospitals, corporations and municipal hospitals.

According to the figures released by the state government, 14,327 new cases of corona have been reported in the state in the last 24 hours while 180 people have died due to the infection. At the same time, 9,544 patients have recovered. So far, 4,08,368 patients have been released from the corona.

Notably, 180 people have died during treatment in the state in the last 24 hours. Thus far 7010 people have died due to corona in Gujarat. Corona’s case has risen more alarmingly today than it did yesterday, and the death toll is rising. There are currently 572 people on ventilators in the state. The number of active cases has reached 1,37,794.

Corona’s fury is growing every day. In the last 24 hours, in the case of Corona, a worrying figure has been recorded in Mehsana district after Ahmedabad and Surat. Even in Mehsana in North Gujarat, it seems that Korona Kaher is being seen. 511 new cases were reported here in the last 24 hours. CM Rupani

The good news is that 1,19,22,841 people have been vaccinated against corona in the state so far.

Corona uncontrollable in Surat and Ahmedabad